What’s growing: Things you didn’t know about the crops in the Western Downs 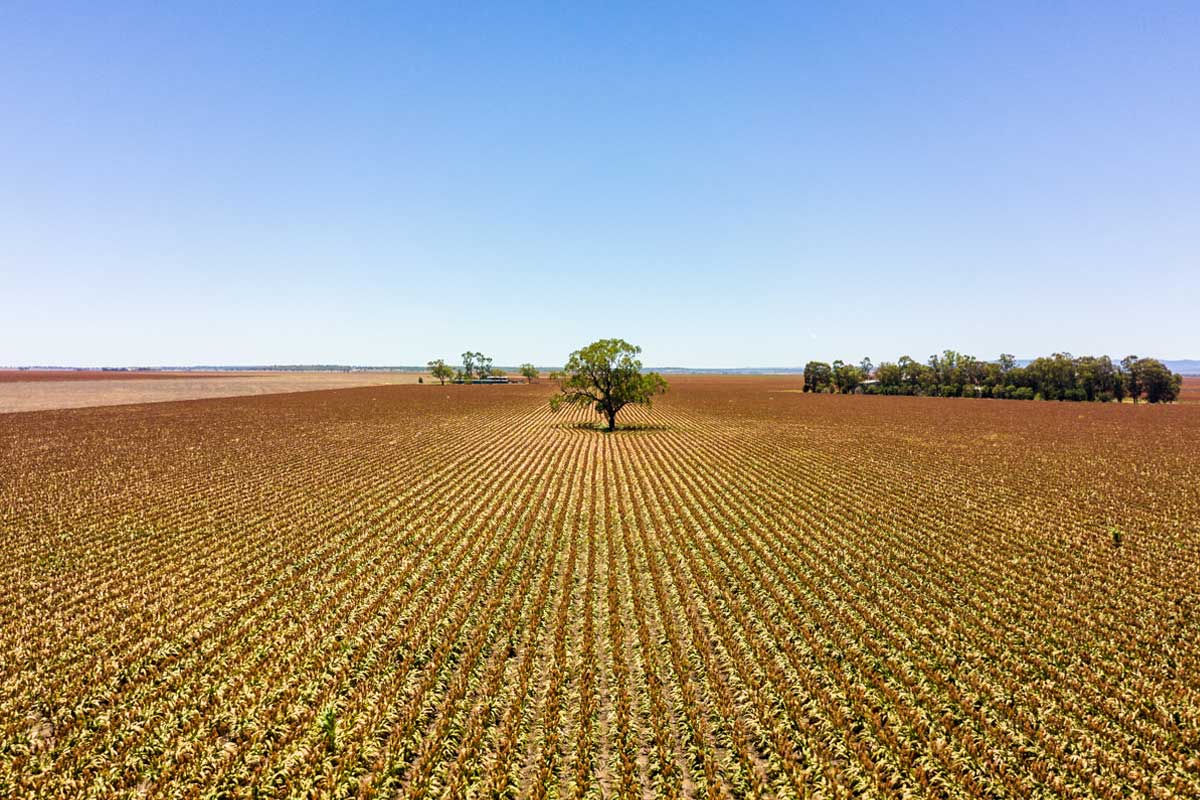 From the skyscrapers of Brisbane to the stark plains of the outback, there’s a whole lotta crop country in the Western Downs in between.

We’re talking agriculture that resembles artwork, with precise separation between plant-rows, textures that rival expensive fabric and bright colours that look like they’ve stepped off a pantone colour wheel and into the Western Downs.

If you’ve got a set of wheels, you’ve got yourself a front row seat to the grow show.

From sorghum to sunflowers and wheat to watermelons, here’s your ultimate guide to what’s growing in the Western Downs.

If you’ve been across Queensland, you’ve probably spotted sorghum – this corn-like crop grows in most parts of the state.

There’s plenty growing in the Western Downs with its warmer temperatures, because this crop needs 4-5 months of temperatures above 15 degrees to spring up.

You’ll know you’re staring at sorghum because it beacons with its bright orange head like a hazard light.

Produced exclusively for animal consumption, the majority of this colourful crop provides food for beef, dairy, pig and poultry, with a small percentage used in domestic pet food.

Best time to see sorghum: Planting occurs between September and January, and the ready-to-harvest crop will grace your windows from December through to May.

Best spot to see sorghum: Take the road less travelled between Jandowae and Chinchilla, where narrow bitumen takes you through fields-upon-fields of the orange crop.

Did you know that Australia (equal with Egypt) produces the highest quality cotton in the world?

What’s more, almost 40 percent of the national crop is produced in the Sunshine State, and Dalby’s black soil produces tonnes of the white fluffy stuff.

From small plants, big industries grow – and from just one 227kg bale of cotton, manufacturers can produce 680,000 cotton balls, or 1,200 t-shirts.

You’ll see the Western Downs’ white gold growing everywhere, best identified by its snowflake-like appearance, growing on plants which stand up to a metre tall.

Its growing cycle starts with pink and cream flowers, which once pollinated are replaced with a white cotton ball.

Best time to see cotton: With a long process from sowing to harvesting (180-200 days), cotton is sown in spring, grown over the summer months, and harvested into bales over autumn. To see cotton fields in full bloom, be sure to visit at the end of summer or early autumn.

Best spot to see cotton: Perhaps a better question is where won’t you see cotton in the Western Downs? Dalby is the poster child for cotton growing with two cotton gins (cotton processing plants) in town.

The jack of all trades in the world of crops, barley, is used for livestock (starch to gain weight), brewing (converted to sugars for fermentation) and malting industries.

Growing faster than wheat, barley takes over fields with most farms planting more than 800,000 seeds, to reduce the risk of weeds growing in its place.

The grain looks almost identical to wheat, so you’ll need to play a game of spot the difference to decipher between the two.

Best time to see barley: Barley is a winter crop and irrigated largely based on the water stored in the soil during the summer months. Although it’s a winter crop, harvest can start as early as October because of the warmth (early when compared to more southern farming areas).

Best spot to see barley: Don’t mistake this grain for grass. You can spot barley across the Western Downs.

Producing 25% of Australia’s watermelons (in both seed and seedless varieties), it’s no surprise the Western Downs (Chinchilla specifically) is proud of their juicy crop.

Watermelons need long periods of warm average temperatures, without the sun being too harsh to burn the melons.

With perfect climate conditions in the Western Downs, the summer crop is harvested 3-4 months after planting.

Best time to see watermelons: Time your visit with the biennial Melon Festival which takes over the town every second February for three days of melon mania.

Best spot to see them: Head straight to Chinchilla, the melon capital of Australia.

This one’s a tricky one to spot – the long thin stems and furry ends are easy to confuse with fields of tall grass. The one giveaway for wheat is the small gaps between rows, proving that it’s a structured farm, not just an overgrown field.

This grain is grown in the Western Downs because of the dry climate (this plant requires a 12.5% moisture rate) and rich soil potential.

Wheat is used for both human and animal consumption, with wheat above a 13 percent protein level marked for human consumption, and anything below that as feed for livestock.

Best time to see wheat: Wheat is sown between May and July, and harvested as soon as they’re ripe, with early spring your best bet to spot them.

Best spot to see wheat: Keep your eyes peeled, you can spot these grassy grains all over the Western Downs.

If crops had a disguise competition, the mung bean would take the win.

These sneaky green crops are marketed as a vegetable but are actually a grain.

In Australia, mung beans are the green-seed variety, branching out from pods formed at the top of leafy plants.

Like chickpeas, this is one crop that earns passport stamps – with over 95% of the country’s mung bean production exported overseas.

Best time to see mung beans: With a relatively short season (90-110 days), you’ll have more chance of spotting these beans in the summer months.

Best spot to see mung beans: Get your detective hat and magnifying glass out, you’re on a mission to spot these across the Western Downs.

Flourishing in the warmer months, when you say summer, the thought of sunflowers aren’t far behind.

When passing by a sunflower field, you can’t miss the lush green plants covered by a sea of the bright yellow flowers – it’s almost impossible to pass up a pit stop for a snap or two.

The summer crop suits the mild temperatures of the Western Downs.

Best time to see sunflowers: Sown in spring due to the early warmth, you can spot them standing tall and in full bloom in the later months of January, February, and March.

Best spot to see sunflowers: Even if you blink you won’t miss these floral displays, look out your window and spot them across the Western Downs.

Often rotated on fields with wheat and barley, chickpeas grow inside pods on a shrub-like plant.

Not a big chickpea eater? Dahl is one of the most popular foods derived from the legumes, and India is the biggest buyer of the crop.

In fact, only one percent of chickpea production is distributed locally, with the rest exported overseas.

Best time to see chickpeas: Requiring an average daily temperature of 15-35 degrees, you can spot this crop in the warmer months.

Best spot to see chickpeas: Check out chickpeas growing around Brigalow, Dulacca, Miles, and Dalby – the chickpea centres of the Western Downs.

Note: All facts and figures sourced from the Queensland Government Department of Agriculture and Fisheries and Cotton Australia.