Where to sink a coldie in the Western Downs 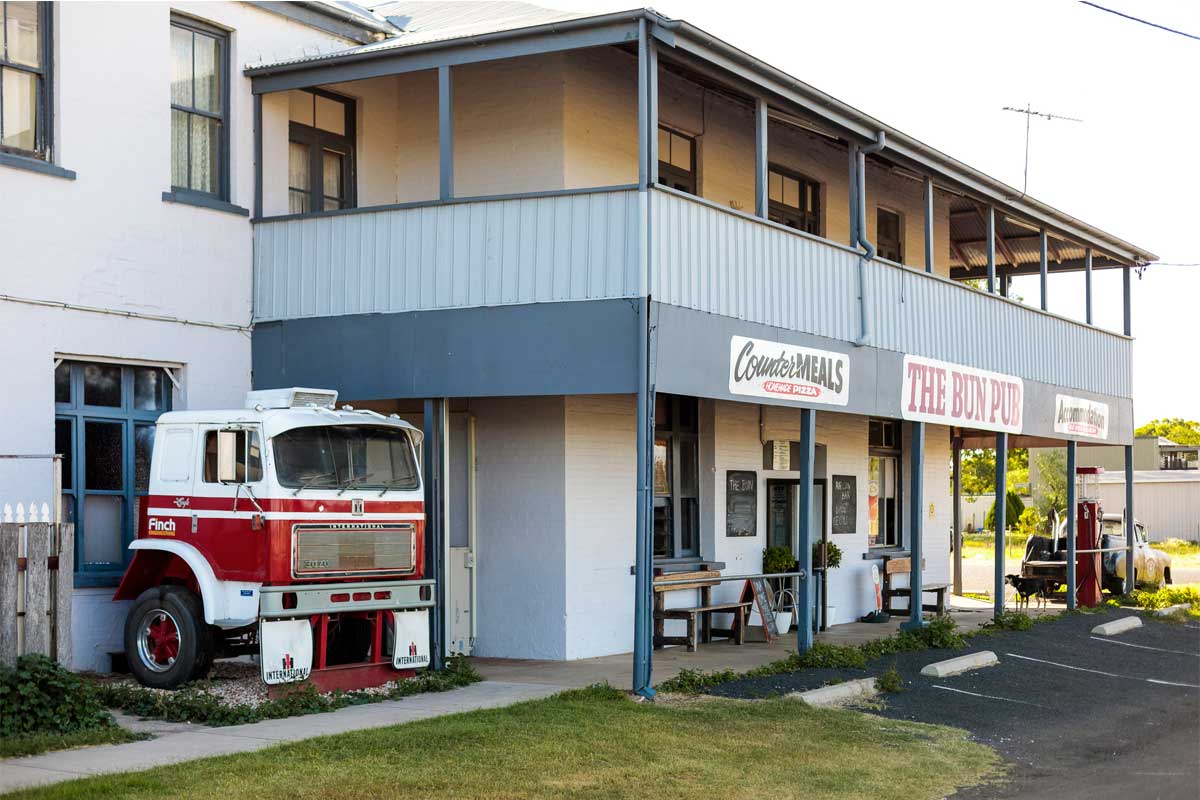 Yep, we’re talking about the historical watering holes across the Western Downs that pack more character than the latest show you’ve been binge-watching on Netflix.

They’re sprinkled across the Western Downs, and you can bet your bottom dollar they’re one of the most popular places in town, especially if you time your visit for Friday or Saturday night.

Whether you’re looking to quench your thirst after a long day of exploring, down a few bevvos with the locals, or simply kick back and enjoy the view, check out this epic pub crawl through the Western Downs.

The only thing more golden than a schooner of XXXX is the beer garden at The Queensland Hotel in Miles.

It’s one of three pubs in town, but seriously hard to miss. The Queensland Hotel shines bright in the main street with the entire length of the hotel covered in twinkle lights.

Make a beeline to the back of the pub to find the beer garden which brings city vibes to the country.

Twinkle lights adorn the walls, dangling into the lush garden beds which complement the dark wood of the tables, chairs, and barrel counter tops – giving the bar ambience with a capital A.

Both food and beverages can be ordered from the bar – enjoy a classic counter menu with the likes of steak, fish, and schnitzels.

Affectionately known as the ‘Waterhole on the Hill’, the Dulacca Hotel has stood the test of time (est. 1908) and still serves the best coldies in town.

Although its moniker might be more of an exaggeration than a reality, you’ll find Dulacca Hotel on more of a slight incline rather than a hill in the centre of town.

You also can’t miss the Dulacca Hotel for its bright pink exterior.

Take a seat in a comfy leather stool and listen to the stories of the bartenders – this is what country hospitality is all about.

According to Club Hotel Chinchilla, there’s no strangers, just friends you haven’t met. Are you ready to test their theory?

The restored hotel sits grandly on the corner of the main drag, Heeney Street, with polished wooden steps and railings framing the light-yellow timber palings of this two-storey Queenslander.

Be sure to visit this local favourite on a Friday or Saturday night, when live music and events take over the pub and the joint is pumping.

For a quiet drink in countryside charmer, Condamine, take to a stool in the Condamine Bell Hotel.

Resembling a log cabin (with actual log cabins attached), a one-story pub is a rare sighting in the Western Downs.

This small hotel focuses on offering quality bar-time where locals and visitors can enjoy a bevvo or two together.

If you’re not from around here, expect to be asked ‘where are you from’ closely followed by ‘where are you going’ – it’s just the local’s way of being friendly.

You know you’re in for a good time (and maybe a long time) when a pub is plastered with camel cartoons to supplement its paintwork.

A pub visit in the camel capital is quite the outdoor affair, with the main bar outside, undercover, and filled with all the games.

Pop on a tune at the jukebox, play a round of pool, darts, or ping pong while the rest of your mates kick back at a nearby table and watch you take a win or two.

Inside you’ll find the Tar-Vegas Gaming Lounge as well as the bar, which is covered with camel cartoons and pictures that will have you keen for the iconic Tara Camel Races all year round.

Add a bit of history to your afternoon coldie with a visit to The Bun Pub, Kaimkillenbun.

It won’t be long before you’re deep in conversation with Bud, the pub owner of eight years, who loves nothing more than sharing a coldie with his customers and playing darts with his dog Barley.

Bud is more than willing to take visitors on a tour of the pub, which has its fingers in all kinds of historical pies.

The town was the setting of a television mini-series starring Nicole Kidman in the early 1980’s, which you can read about in the pub’s dedicated history room.

If you’re a wartime buff, take a look at the Hidden Signatures display, which contains the signatures of 18 diggers from World War I, found on the inside of a linen cupboard in the pub.

Once you’ve finished your tour, reward yourself with a coldie at the bar where you can take in classic country paraphernalia from street signs, posters, and hanging quotes.

The folks at Exchange Hotel in Jandowae mean business with a bar not only at the front but also the back of the pub.

With enough seating to host the entire town at once (all 1,000 of them), this pub isn’t running out of room any time soon.

Relax out the front as you watch the hustle and bustle of the town or take advantage of the air-conditioning (and the close proximity to round two and three) inside at the bar.

If you’re chasing those ‘I’m not in Jandowae anymore’ moments, head to the beer garden that has its own tiki bar. Mai Tai, anyone?

Switch your amber ale for a beverage of darker proportions at Shackleton’s, the bar inside Lyric Restaurant atop the Bunya Mountains.

Perched approximately 1,000m above sea level, Shackleton’s takes the title as Australia’s highest whiskey bar, serving over 113 different types of peaty goodness from all corners of the world … at least, until proven otherwise.

Be sure to ask the bartender the story behind the bar’s name – it’s an edge-of-seat tale that involves the man who discovered Antarctica, his whiskey bottles, and the expedition to discover lost whiskey ingredients.

Conveniently the story takes a couple of nips to get through … something we’re sure you’ll be happy to oblige with.